skip to main | skip to sidebar

"The origin of shells in high places."

Or, as Julia Lupton suggested, negative anthropology could be an account of culture where you subtract human beings. Think of all the artifacts that are not produced by human civilization, like beehives and seashells and things like that. Those could be the objects of a negative anthropology.


Regardless of the theoretical subtraction, does this still import a priori a rather optimistic theory of the human?

Where architecture and mechanism retain value as a shadow of some essential human work of event planning –– or, say, there is still self-flattery in the plastic spirit and autogenous stones of Kircher and Spinoza.

But more interesting: how the negative anthropologist does taxonomy, which may also be a way of studying religion in this modulo universe. Imagine some clever student beginning to rattle that cage––!

"Which is greater, the umbrella or the face?"
Posted by A Maxwell at 3:47 PM

This is Peeping Mot.

1/ Homage to Leo Marks, WWII cryptographer, and author of the screenplay for Michael Powell's Peeping Tom (1960).

2/ A shorthand for this vertigo of the unfolding epigram: the experience of an aphorism as it re-engineers the world, whether cruelly, or paternally, in the model sense of the word, as a house-husband delighting the orchid in its pram.

Further Reading:
The Prior Art. 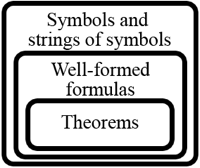 Where it sees and speaks, agog at the "well-formed formulas".